From NYU Press, forthcoming Oct. 2021:
In the Avidly Reads Series, in association with L.A. Review of Books.
Available for pre-order from NYU Press and your community and online bookstores.
* * *
“Opera is community, comfort, art, voice, breath, life. It’s hope.”
All art exists to make life more bearable. For Alison Kinney, it was the wild, fantastical world of opera that transformed her listening and her life. Whether we’re listening for the first time or revisiting the arias that first stole our hearts, Avidly Reads Opera welcomes readers and listeners to a community full of friendship, passion, critique—and, always, beautiful music.

In times of delirious, madcap fun and political turmoil, opera fans have expressed their passion by dispatching records into the cosmos, building fairy-tale castles, and singing together through the arduous work of social activism.

Avidly Reads Opera is a love letter to the music and those who love it, complete with playlists, a crowdsourced tip sheet from ultra-fans to newbies, and stories of the turbulent, genre-busting, and often hilarious history of opera and its audiences.

Across five acts—and the requisite intermission—Alison Kinney takes us everywhere opera’s rich melodies are heard, from the cozy bedrooms of listeners at home, to exclusive music festivals, to protests and prisons. 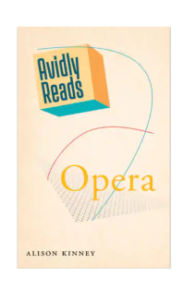 “Alison Kinney’s words are like the opinionated arguments you seek out from a friend you trust and respect enough to disagree with—but only occasionally. The energy, care, and excitement are palpable and propel you through this chatty romp through the repertoire. From classic operas to lesser-known and recent works, this book holds opera accountable for its sins while also walking humbly through the halls of a genre that can still say important and trenchant things about social justice today. Kinney shows us that there is a seat for everyone in the opera audience, and welcomes us in.” ― Professor Naomi André, University of Michigan

“When making a solo trip to the opera, most everyone who wasn’t raised on the art faces this question: ‘Do I really belong here?’ Alison Kinney says ‘yes,’ and invites you to ride along with her: to performances at Wagner’s theater, and also, less conventionally, at a prison. She’s insightful and entertaining, but not merely good company. Her larger conversation with the tradition―regarding its pleasures and its problems―should excite anyone eager to see opera with new eyes.” ― Seth Colter Walls, New York Times contributing music critic