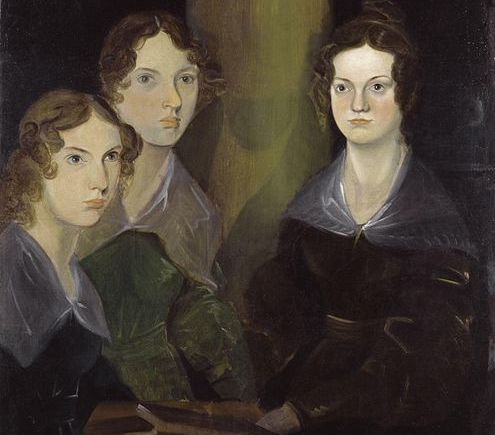 What I can say is that it is a big fat book, very entertaining, and, I should think, meticulously researched. Some readers may be put off by the chapters about Patrick, long ere the appearance of his children (on the literary scene, or at all), but I was charmed by his decades-long efforts to clean up the Haworth water supply (though I was surprised that Barker didn’t make the connection between the waterworks and Haworth curate/possible love interest William Weightman’s agonizing death from cholera), to get his poetry published, and to survive small town political skulduggery. Readers who, like me, are unacquainted with the biographical details except those derived from the very Brontë mythos that Barker deplores, will be surprised to see that Haworth in the first half of the nineteenth century was a not-unprosperous industrial town and transit hub with thousands of inhabitants, and not the lonely hamlet that it became after industry left, and in which visitors today can feel claustrophobic. We will also be surprised to see, from the evidence of hundreds of letters, journal entries, and interviews, that Patrick Brontë was not a crazed tyrannical hermit who starved his daughters; that Charlotte, Emily, and Anne regularly attended concerts and lectures, subscribed to the lending library, read the papers voraciously, and did a lot of entertaining (Emily baked and managed the household; Charlotte couldn’t even order a chop); and that Arthur Nicholls, Charlotte’s unfortunate husband, actually did enjoy and encourage her writing, rather than repressing it. We also get ample evidence of where the “ë” came from. Good stuff.

In the case of the three interesting sisters, which is the reason that anybody would read this book, Barker does a great job of showing the contradictory details that round out the little that can actually be known about people who lived intensely private lives. Charlotte left behind a great many unflattering and not always factual letters. Emily and Anne left behind so little documentation that Barker does well, very well, not to speculate on their lives or feelings. While some readers might be disappointed that Barker didn’t try to invent and speculate, I found this refreshing. Apart from some surprising spite that Barker seems to feel for Charlotte (in her attempt to give a human-scaled and full portrait of her, she gives way to some venom that one can imagine comes from getting too close to a subject, like being roommates), her account of the sisters is also compelling and satisfying.

One can see how a diligent historian might be drawn to write about Patrick and Branwell, who both wrote a lot, and whose letters and works were preserved: there is simply more one can say with certainty about them. Which is why it’s disappointing that Barker, who could be so circumspect, peppered her meticulously researched work, which overturns a great many assumptions about the family, with a few polemical statements of her own, especially about Branwell’s talents. As she wrote of another critic on the Brontës, “While doing sterling detective work, Ratchford made a number of assumptions and presents the reconstruction as much more concrete than it actually is.” There are moments when Barker’s work, too, would be more plausible and, frankly, interesting, if she would just leave things open.

Of Constantin Héger, whose relationship with Charlotte is of the utmost interest, Barker constructs a timeline of growing intimacy and friendship between them, then a sudden rupture, after which Constantin’s wife takes an aversion to Charlotte, Constantin gives Charlotte the silent treatment, and Charlotte, suffering miserably, begs and begs him for a renewal of his attention. Barker concludes that, since Constantin never wrote any letters about it, the only possible interpretation is that there was nothing for him to say: that he must necessarily have been a man of integrity who had nothing to be ashamed of. Meanwhile, anybody who’s ever known a man is saying, “Hm, I don’t know about that.” Maybe the scrupulous biographer who refrained from commenting on Emily’s wholly undocumented love life should, in this case, have simply said there wasn’t sufficient evidence to make any sure conclusion.

Regarding the juvenilia that the four siblings worked on in their youth, after carefully detailing how Charlotte and Branwell worked “simultaneously” on the Angria storylines, Barker credits him with being the “inspiration” of her work. When Charlotte turns down a marriage proposal from a man who physically resembles Branwell, Barker concludes that, since Charlotte tended to like women whose faces reminded her of her sisters, this MUST show something “deeply revealing” about her relationship with Branwell (although one might reasonably come to the conclusion that most–though not all–women don’t actually get revved up by men who are dead ringers for their dead brothers). Then, and at the very end, Barker writes disparagingly of Mrs. Gaskell’s biography, “the Branwell who was his family’s pride and joy, the leader and innovator, artist, poet, musician and writer, is barely touched upon, despite the fact that, without him, there would probably have been no Currer, Ellis or Acton Bell.”

It is one thing to find Mrs. Gaskell’s biography (and the mythos that sprang from it) biased and derogatory and, according to Barker’s research, nefariously sourced and written. Although I admire Elizabeth Gaskell’s novels, I’m inclined to view Barker’s findings in this regard as fair. However, Barker provides no evidence to support the idea that Branwell was any more of an originator and inspiration to his siblings than they were to him. There’s an unfortunate echo of Mr. Mybug from Cold Comfort Farm, who’s writing a biography of Branwell that describes how his hateful drunkard sisters (especially Anne) forced him to buy gin for them and passed off his novels–“Shirley and Villette–and, of course, Wuthering Heights”–as their own. In support of her argument, Barker reprints large extracts of Branwell’s poetry and shares his early successes as a portrait painter. So, I give you some more paintings by Branwell Brontë.

I think that the evidence Barker does provide shows that the poor kid had some literary talent, and has been somewhat maligned in the mythos. He appears to have truly enjoyed hanging out and writing with his sisters and reading and acting out the papers together, and been a far nicer and better-meaning guy than history has allowed him to be. But he had addiction problems, problems with loneliness and love, problems with holding down a job–and his biggest problem of all was his desire to produce a major work of art and knowing he was never going to manage it before he wasted away and died. It’s impossible to say, from the evidence provided in this book, which way he’d have gone, if not for the addiction–or even if he’d never taken a single drink. And I think it’s really too bad to take a nice kid like that and laud him as a misunderstood genius, because Branwell, more than anybody else, would have resented earning the laurels for work he hadn’t yet accomplished and proofs he hadn’t yet provided: it was the work that mattered to him, as it should for any artist. And it’s too bad to publish his earnest, half-baked poetry–no better than the poetry his sisters wrote at the same age, but no worse–and call it great. It makes Branwell look like a pathetic dope, and it makes Barker look a teensy bit overzealous in her pleading. Branwell deserved better than that, and the biography is SO much better than that.