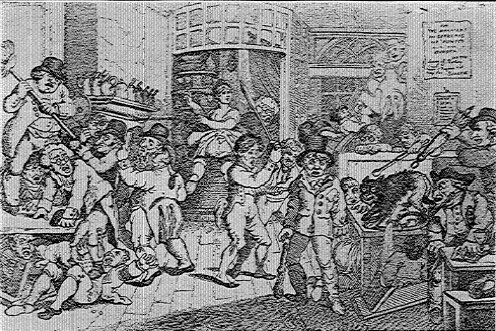 ** spoiler alert ** Here be spoilers.
Jane Eyre was a masterpiece, and it’s hard to get around it in reading and reviewing Charlotte Brontë’s other novels. That’s particularly true for Shirley, which has the same slow build as JE and Villette, without either the weirdness and genius of JE or the meticulous portrait of depression in Villette, so I’ll mention the book’s flaws, first.

First, the unequivocal acceptance of the ideas that technological/industrial “progress” is both inevitable and, necessarily, a positive good, and that the goal of progress is to better the owner, while maintaining only the status quo for the workers, because self-respecting workers don’t want betterment or development or enrichment or growth: they just want their “honest” wages, i.e., no more than they deserve. Despite Brontë’s compassion for unemployed workers, the “honest” and starving, she seemed unable to imagine a form of Progress that promoted the enrichment, development, and growth of all–she’s terribly concerned about the cheekiness and insolence of the lower classes getting “above” themselves, when they’re not busy being murderous Luddite rabble. Which is painful, given her great concern, in this book and the others, to prove that women (gentlewomen) might, if educated and given opportunity, do worthwhile things–might better themselves, and others. This failure to extend the analogy to other classes is not atypical of 19C proto-feminism (or, for that matter, of 20C feminisms, at least until Marxist feminism and the great Third Wave of postcolonial feminism!), but I’ll still point out that it’ll irritate the contemporary reader.

Second, we begin with about 200 pages in which Brontë exhibits the worst of her faults as a writer: philippics against the French (by which I suppose she meant Belgians) and/or Catholics; an overreliance on phrenology to depict character; embarrassing scenes in which our middle-class heros repress insolent yokels by using big words at them; and even more classical references and speechifying about the Moon than usual (Brontë could never have improved on SPOILER: Jane’s anguished Moment with Nature/The Moon/The Female Divine after the discovery of Rochester’s treachery; she should have let well enough alone after that). These defects appear in the other novels but are muted somewhat by the good parts; here, you spend the next 100 pages, after the introduction of the character of Shirley, wondering when she’ll take charge of her mousy friend Caroline’s predictably melancholy love life, kick out the annoying cast of extraneous minor characters, and show us some action.

But then, somewhere around p. 300, we do get action, and what action! Maybe because Brontë had finally buried her three ailing siblings, whose illnesses and deaths occurred between her first draft and this approximate point in the book; maybe, because she just wasn’t all that good at beginnings, but, having introduced every single possible character who might occupy west Yorkshire, she could settle down and write a damn good story intertwining all their lives. Suddenly, a love quadrangle! A gender-bending, gun-toting heroine! And a RABIES plot! (There is no novel that cannot be improved by the introduction of a mad dog. Especially a mad dog named Phoebe.) And with all the new excitement and revelations going on, the reader looks back at the first 300 boring pages and sees how carefully Brontë constructed those pages. We see that powerful, rich, feminist Shirley, who bosses–sometimes literally–all the other men in the story, is as hampered by sexual inequality in the pursuit of love as downtrodden, poor, sad Caroline is: neither of them can ever make the first move, because the perceived lack of femininity in such a gesture would kill the love and respect of any man worth having. How unfair! The blood boils! (Until we see that Brontë agrees with this: it’s an unjust situation, but it’d be still worse to behave like some unfeminine “Amazon”). We see how all the inaction and hemming and hawing in those early pages lead to moments of true regret and sorrow when the characters realize how they’ve wasted their lives (see the wonderful chapter of conversation between Moore and Yorke, “Rushedge, a Confessional”). And some of those dozens of characters that Brontë described in the beginning, for the sake of whose description she apparently sacrificed any notion of plot or theme, reappear to do extraordinary things: see Martin, the surly pre-teenager who hates “womenites,” who’s described in a paragraph and then disappears for, oh, 550 pages, suddenly pop out of the woods, utter some extraordinary dialogue, and give us some of the most funny and moving moments in the entire novel. Brilliant stuff!