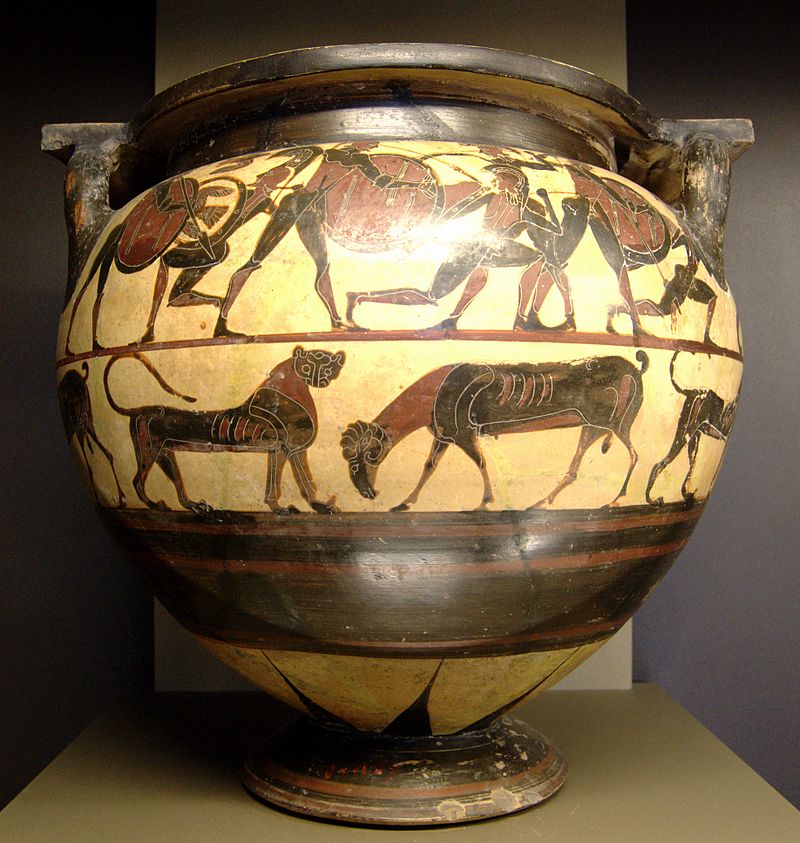 git yer hands off my Corinthian column-krater, ca. 600 BC, Louvre

I’m often kept up at night brooding on my troubles, wishing I could find some solace that would help me sleep. But now I know that the best way to keep insomnia at bay is to get out of bed, hitch up my chariot, tie the corpse of my mortal enemy to the back, and drive around for a few hours, dragging him, until I cheer up and can go back to sleep. The Iliad is unmatched, in my reading, for works that describe the bloody, ridiculous, selfish lengths people will go in order to feel better. The sticks and stones fly (and gouge out eyes, smash skulls, slash livers and veins until the blood sprays–this poem is definitely not for the squeamish), but the real weapons of the Trojan War are name-calling, cheating at games, and stealing your best buddy’s girlfriend or mixing bowl or ox. Most of the action occurs when somebody gets his feelings hurt, the baddie won’t apologize, and the sensitive one throws a fit, which can involve letting all of his friends die while he gets an olive-oil massage, or else razing a city, raping the women, and joyriding over other men’s bones. The Iliad suggests that even at its most glorious, war can be advocated only by people with the emotional lives of spoiled four-year-olds.

Indeed, most people are like spoiled four-year-olds, and truisms like that have resulted in some very tedious books and movies, but the Iliad is never tedious, or rather, only ever horrifically tedious (more on that below), first because it’s good art, and secondly because, while many artists have stated, “My emotional life is a shambles,” Achilles’ emotional life results in the destruction of the rules of engagement, of “civilized” warfare, and of a civilization itself: babies thrown from ramparts, old men cut down at their altars, generations murdered, while Zeus snickers. The Iliad demands that the individual reflect on his or her engagement with the world at large, and the world is not a comfort zone: is it okay to decimate a town, in retaliation for your best friend’s death? (Yes.) When you’re kidnapped from home and thrown to the soldiers for sexual sport, are you supposed to be grateful? (Yes, and cook them some cheese to show it.) When a man murders your son and desecrates his corpse, what will the gods, to whom you and your son have given many, many sacrifices, do to help you out? (Send you groveling to kiss the murderer’s hands, give him some fancy shirts, and have him treat you to some barbecue.)

What else does The Iliad say? That every life matters, and every death. The poem is a rolling casualty list, in which every man who dies has a name, a home, friends, and family who love or mourn or curse or disown him, sometimes a specified quantity of livestock who wonder where he is at milking time. Characters are introduced only to be killed, but their deaths are unique, and nobody dies without causing a change in the fortunes of his comrades or enemies, mostly by precipitating their own deaths. This is where the tedium comes in, but it’s a harrowing kind of tedium: gruesome deaths, piled on, can cease to move Achilles, Agamemnon, or us, but they don’t stop happening just because we’ve ceased to pay attention.

And what else? That war can make for great poetry. Fagles’ translation is awesome (apart from a couple infelicities–the first “So help me” was hilarious. The fourth one was a little old). The verse is crisp, lucid, immediate, and very, very violent: the accessibility of the syntax and vocabulary make you read faster and faster, so the terrible scenes come upon you like an onslaught, entrails flying, chariots mowing people down, goddesses getting punched in the boobs, and behind it all the ever-present weeping. Egad.